As we approach the conduct of the presidential elections on Saturday 4thDecember 2021, The Gambia Teachers’ Union hereby urges all teachersand students to participate in

The Gambia Teachers’ Union receives a donation of Twenty-Two bicycles from the Steve Sinnott Foundation earmarked for school-going children in the rural Gambia. The Steve

Barely a month after conducting a training for Sixty Home Science Teachers in Region 2 on the making of reusable pads, the Gambia Teachers’ Union

The Gambia Teachers’ Union today, 17th August 2021 convened a session for 12 mentors under its ‘Mobile Technology: Mentoring and Professional Learning Communities for Women

Findings have shown that a greater percentage of school-going girls skip school during their mensural period. This is largely associated with a lack of access

The structure is meant to comfort staff in the border settlement in the Kantora District in the Upper River Region.

The foundation stone of the building was laid by the Minister of Basic Education, Claudiana Ayo Cole, and witnessed by the Permanent Secretary at the Ministry of Basic and Secondary Education, General Manager of the Gambia Teachers’ Union Cooperative Credit Union, among others.

For the Minister of Basic Education, Claudiana Ayo Cole, the intervention by the GTUCCU is a clear manifestation of the cordial ties between the Union and the Ministry. She extolled the efforts of the union officials in cementing the relationship. Hon. Minister Cole enjoined teachers to be proactive in-service delivery, saying, “To whom much is given, much is expected”.

The General Manager of the GTUCCU, Baboucarr O. Joof, said the intervention is timely as described by many and it is based on a cardinal principle of cooperative societies, ‘People Helping People’.

He recounted the journey that culminated in the intervention by the GTUCCU which came at a time when the body is about to clock twenty-five years.

Bolibana is approximately 400KM from the capital Banjul. The predominantly farming community lies a few kilometers away from the Gambian border with the southern part of Senegal. With seemingly inaccessible roads and poor communication network, the community has been designated by the Ministry of Basic and Secondary Education as a hard-to-reach area.

The Principal of the school, Alhagi Jawo, said the retention of teachers posted to the school has always been a challenge due to lack of basic facilities such as accommodation to keep them in the school.

“We face many challenges here, from accommodation, feeding, access to health facilities to even communication,” the young man revealed.

To many, it is patriotism and sheer admiration of the job that keep them in communities like Bolibana. Unlike those who came and left due to the living conditions in the school, Dembo and his colleague stayed to inspire the innocent children who come to seek knowledge from them on a daily basis. Under the scorching summer sun, Dembo revealed that when temperatures are high, the excessive heat switches off their mobile phones. Dembo uses the school library as his room. This he said is because he could not cope with the temperatures in the stores they occupy.

“We sleep in offices. In fact, for me I have my bed in the library that’s where I sleep,” he said.

According to him, access to health facilities is also a challenge for them. The nearest health facility accessible to them is Fatoto. Fatoto is several kilometers away. He recounted his first days in the school as ‘very terrific’ as a result; he ‘felt sick’ and could not access medication in the first days. In addition, he was later taken to the Basse Health Centre, where he was admitted for days.

Dembo was full of praise for the GTUCCU for coming to their aid. The intervention, he believes, will change their accommodation nightmares. He revealed that before the staff quarters intervention, the GTU had helped them with solar powered radio sets and bicycles for some of the students.

“Before, when we used our mobile phones to tune to radios, we only had frequencies of Senegalese radios. We were cut-off from happenings in our country. But when the union brought us the radios, [now] we are able to tune into Gambian radio stations…,” Dembo said.

The provision of quality education is crucial in the advancement of any nation. However, it is a widely held belief that for quality education to exist, the welfare of service providers such as teachers is instrumental. It is on that basis that the Gambia Teachers’ Union Cooperative Credit Union has begun the construction of a fifteen-room staff quarters at the Bolibana Basic Cycle School in the Kantora District, Upper River Region.

When completed, the floors of the staff quarters will be tiled and fitted with solar panels, a flat screen television, and beds. According to the General Manager of the GTUCCU. A “Bantaba” to serve as a relaxation spot for the staff will also be constructed, upon the completion of the quarters. 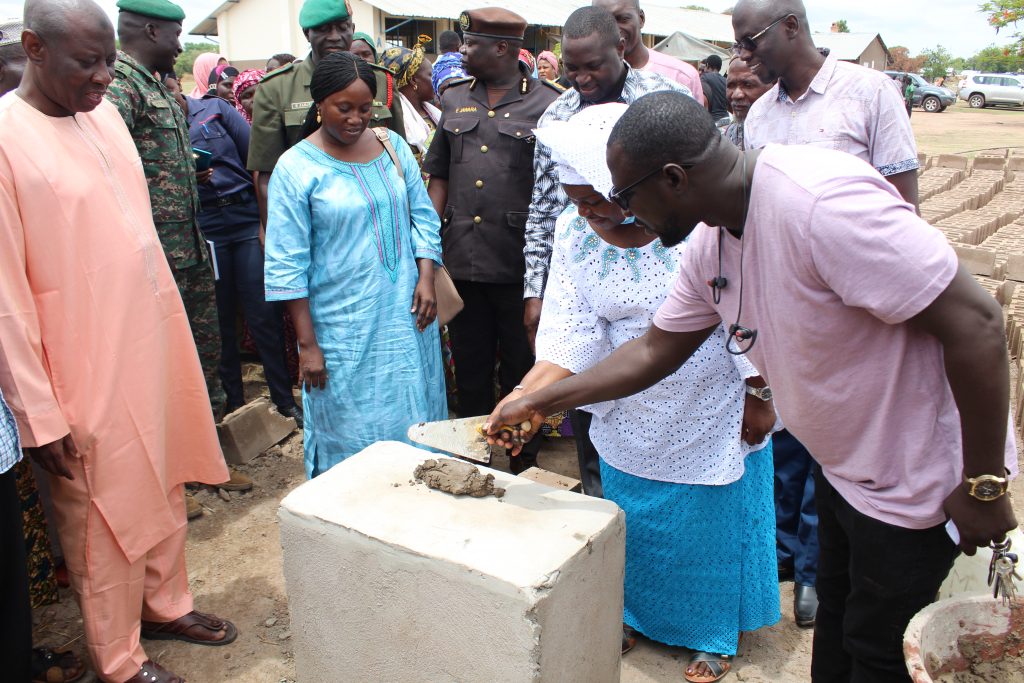 In her welcoming statement to mark the official opening ceremony, the General Secretary of GTU, Madam Antoinette Corr, said the book development initiative started two years ago but was delayed by the outbreak of COVID. She thus thanked partners for the initiative.

The President of the GTU, Ismaila Ceesay, said the initiative is meant to improve reading skills in schools. He also highlighted the significance of the initiative in portraying our cultural dynamics. He advised participants to be original.

Dr. Dennis Sinyolo, the Education International’s Regional Director for Africa, said the project seeks to address the lack of culturally relevant materials in schools. He emphasized the significance of involving teachers in this process, saying teachers are not passive implementers of the curriculum but agents of change.

Other speakers included the PS-MoBSE, Louise Moses Mendy, Director NCAC, Hassoum Ceesay, Director CRED, Momodou Jeng. They all praised the exercise and the expected results in the advancing the reading culture in schools.